Being an Artist During COVID-19: A Seattle Drag Performer’s Story

Five years ago, Nico was a theater arts major at the University of Minnesota in Minneapolis. Today, they perform as Miss Texas 1988, one of Seattle’s finest drag performers, combining humor and obscure characters to create original ideas for highly entertaining performances. While a lot has changed since the COVID-19 pandemic entered our lives and caused live performances to take an indefinite hiatus, at least one thing hasn’t changed at all: artists’ need to put original content into the world. 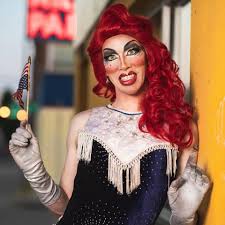 As a college student, Nico (who will be referred to as ‘Texas’ from here on) got tired of theater in the usual format and decided to experiment with some original characters at open mic nights and cabaret shows outside of school.

“I was looking for ways to branch out of the performances I was doing” Texas shared. “I also had some experience in the costume shop. So I started playing with gender and these funny characters and people liked what I did.”

It was at one of these cabaret performances outside of school that Texas’ drag identity was born.

“I was in a show called Queertopia, at Intermedia Arts, a performance space in Minneapolis, which has since closed.  I wasn’t even in full drag and was wearing this blue sparkly dress, and the bar tender said “Who the fuck are you, Miss Texas 1988?” and I thought that was brilliant. That was the dress that started it all!” they explained.

The next year, Texas performed at the same venue in full drag, as Miss Texas 1988, and has been performing in drag ever since.

On Moving to Seattle

“I was participating in amateur drag shows and DIY collaborative performances in Minneapolis and a lot of them shut down, but I had a lot of friends who moved out to Seattle.”

When a Seattle friend’s roommate moved out one year, she invited Texas to move in.

“The drag scene was more vibrant in Seattle and there was a lot was going on – this was my chance to really delve into the drag scene,” they said. Their roommate saw a poster of Arson Nicki and Cucci Binaca (two drag queens well known throughout the Northwest) – and at her suggestion: “these look like strange, fun, queens, you should join them!” they decided to contact them.

“It was the right time, right place kind of thing. They liked enough of what I did, so that kind of launched drag for me here.”

On the COVID-19 Pandemic

Texas was performing in Astoria, OR when news of COVID-19’s arrival in the U.S. broke.

“They love weird drag down there. We were kind of joking about it because we didn’t think it would get that far. We were like ‘oh, haha, it’s going to be fine.’ But my parents were like ‘don’t go back to Seattle, come back to Minnesota,’” Texas said.

On Performing During COVID-19

Since the pandemic, Tush has continued, in streaming format, through Vimeo.

“We have finally settled into a routine. We had a tech meeting with the Stranger – we’re going to do a variety show next!” Texas said. “First, people were going to do shows on Instagram live, knowing the quality wouldn’t be great, but doing this to have a little fun. Then we moved to Zoom, still live, but we realized that live performances [on Zoom] still have really bad audio quality.

The thing that worked the most is what we are doing for Tush: you film your [performance], you put whatever you want into it–you can redo it, make a short edit or something, do a costume change – so really utilizing that, compiling that into a video and using a streaming platform. We just released a video on Vimeo!”

On Resilience As an Artist

“I’ve talked to people about how great drag is for adaptability. You can make anything happen. It’s not really dependent on a space or a time, or a theater, you can do it in a coffee shop! Or on Zoom!” Texas said.

“I am going to answer that pessimistically and optimistically,” they shared, when asked about resilience as an artist. First, on the pessimistic side:

“I was doing [drag] full time, and I don’t think I’ll be able to do that for a while. It kind of crashed the profitability of regularly performing shows. We need to make sure that we take care of our local community so that the arts can continue after this. Three of the venues that I was working at have already shut down or will be shutting down. How that is going to change the arts scene is how we band together in defending these spaces and make sure they don’t become offices and rich-people condos.”

And on the optimistic side:

“[The pandemic] offers a whole different audience to connect with. Moving online, we can have people tuning in from all over the world, and build that sense of community. It’s a lot more accessible – from people who can’t go out that late because of their jobs, to people that couldn’t leave their homes because of health concerns. I’ve had a lot of people say kind things, like ‘even when things open up, will you still make videos?’ It just adds more to the artist tool belt and the possibilities for what art we can create. Everything is going digital anyway so we need to move with it.

One of the best things I’ve learned is how innovation can really lead to radical change in the community. And there is a lot of opportunity for self-empowerment. We can all get better about representation.

My main thing, to anybody who’s just looking for opportunities – the arts is something where the phrase, ‘if there’s a will, there’s a way,’ is really true. If you feel you don’t have an opportunity, if you’re upset about a lack of content or representation, lack of space, be bold, go out, take the reins, and people will come. Put what you want into the world.”

Explore occupations by career categories and pathways and use real time labor market data to power your decision making.

First, choose an industry of interest, then filter for occupation. (If you'd like to see data for a specific location only, filter by state.)

The number of jobs in the career for the past two years, the current year, and projections for the next 10 years. Job counts include both employed and self-employed persons, and do not distinguish between full- and part-time jobs. Sources include Emsi industry data, staffing patterns, and OES data.

These companies are currently hiring for .

Earnings figures are based on OES data from the BLS and include base rate, cost of living allowances, guaranteed pay, hazardous-duty pay, incentive pay (including commissions and bonuses), on-call pay, and tips.

A list of hard skills associated with a given career ordered by the number of unique job postings which ask for those skills.

A list of job titles for all unique postings in a given career, sorted by frequency.