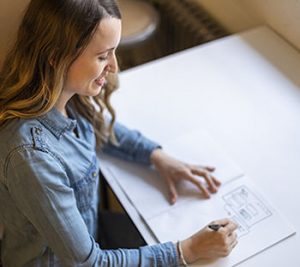 Sarah Strickler had every intention of pursuing a STEM degree when she arrived at the UW as a freshman. She’d done college-level microbiology research in high school through independent study, and earned top honors at an international high school science fair. But her second quarter on campus, out of curiosity, she took a course on color theory in the School of Art + Art History + Design (SoA+AH+D). By sophomore year she was an interaction design major.

“Interaction design combines art and research and is very human-centered, which appeals to me,” says Strickler, who quickly discovered that design courses are as challenging as those in the sciences. “I could take a chem lab and get a really high score, but in a design course you’re never satisfied with your work, never satisfied that you’ve pushed it as far as you can. I think I pulled more all-nighters in my first design course than in any of my UW science courses.”

“I could take a chem lab and get a really high score, but in a design course you’re never satisfied with your work, never satisfied that you’ve pushed it as far as you can,” says Sarah Strickler.

Central to interaction design is an understanding of human behavior, with the goal of finding new ways to approach human-centered problems through design. Many class projects present a challenge — for example, how to improve sex education for parents and their children — with many potential solutions.

The starting point is always research. For the sex education assignment, Strickler and two classmates conducted two-hour interviews with more than a dozen parents from different backgrounds — 24 hours of interviews! — to understand what the parents felt was most important for their children to know about sex, and at what age. Based on those conversations, the students developed the idea of a personalized digital book for children, with content and illustrations tailored to the child’s age and gender and a place for parents to add notes that reflect their values.

Spending so much time on interviews might seem excessive for a class project, but Strickler tends to be thorough — some might say zealous — about her research. She recalls a data visualization class project in which students were asked to create a zine, or small magazine, featuring data shared in a visual form. For her zine on a sustainable and healthy diet, she researched the resources required to raise livestock and transport food to grocery stores, investigated healthy packaged food options, conducted in-depth “co-design” sessions with five adults and children about their eating habits, and more. (Co-design involves designing with the people you are designing for.) Students were expected to produce a 15-page zine based on their research; Strickler’s was a whopping 70 pages.

One thing that distinguishes this major is that we know how to do research and think through how to solve a problem.

“It was kind of a joke among all of my classmates and our professor, because it just blew up into this huge book,” Strickler laughs. “The topic was just so big that I took it in a different direction. But that’s what’s fun about interaction design. The professors want you to be creative and go in a direction that is meaningful to you.”

Outside of class, Strickler has participated in a data visualization internship at NASA — working with computer science doctoral students and meeting with literal rocket scientists — and now volunteers on the research team of UW iSchool professor Jason Yip. For Yip’s project, Strickler meets with 7- to 11-year-olds twice a week to collaborate with them on small co-design projects. “The kids love it,” says Strickler. “They say it’s a place where everyone listens to them. They get to see adults take their ideas seriously and implement them.”

As Strickler nears graduation, she and two classmates are hoping to realize an interaction design idea they dreamed up last year. They developed BraveSpace, an online mental health resource, after talking frankly about their struggles with depression and finding that it strengthened their relationship. “We thought it would be cool if we could create some type of digital space where other people could share with each other about mental illness and mental wellness in a way that was raw and authentic, so people don’t feel like they’re alone,” says Strickler.

After analyzing existing mental health platforms and interviewing students, psychologists, suicide experts, and many others, the students created a BraveSpace prototype. They are now raising funds so they can hire software engineers to build the site.

Along with her work on BraveSpace, Strickler plans to pursue a graduate degree in art therapy, which she feels combines her interests in art, science, and mental health. Whatever comes next, she believes her interaction design major has prepared her well.

“One thing that distinguishes this major is that we know how to do research and think through how to solve a problem,” she says. “You get a little bit of instruction and then you have to learn how to make it all happen. It does a really good job of preparing us for real-world situations where we don’t know the answer. I think that’s my favorite thing about the major.”