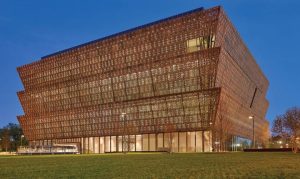 {Above: The National Museum of African American History and Culture, located on the National Mall, in Washington, DC.}

Did you know that Black History Month exists because of a nonprofit organization and its dedicated leader?

Dr. Carter G. Woodson, often called the “Father of Black History”, founded the Association for the Study of Negro Life and History in 1915 to promote the study of Black history and the role of Black Americans in American history. In 1926, the organization, now known as the Association for the Study of African American Life and History, launched “Negro History Week” to elevate their mission and help school systems teach black history.

Negro History Week became a popular, annual tradition, with many college campuses extending it to a full month in the 1960s. In 1976, 50 years after the observance began and 12 years after the passage of the Civil Rights Act, then-President Gerald Ford officially declared the month of February as Black History Month, and every president has done the same ever since.

To celebrate Black History Month this year, learn about other notable Black social-impact leaders and organizations, past and present.

During her congressional career, Chisholm spoke out against the Vietnam War and advocated for access to education and childcare; nutrition for infants, children, and pregnant women; immigrant and domestic worker rights; and consumer protection.

With a slogan of “unbought and unbossed,” Chisholm launched her campaign for the Democratic nomination in 1972, in part to “repudiate the ridiculous notion that the American people will not vote for qualified candidates, simply because he is not white or because she is not a male,” she said at the time.

She had to fight to get her name on the primary ballot and a spot in the televised debates—not to mention the multiple assassination attempts she survived. In spite of the hurdles, Chisholm still garnered 10 percent of the vote at the 1972 Democratic National Convention. She went on to serve in Congress for another decade and passed away in 2005.

In 2015, Chisholm was posthumously awarded the Presidential Medal of Freedom (the nation’s highest civilian honor) by President Barack Obama.

Hazel Johnson-Brown made history in 1979 for two reasons: She became the first Black woman to earn the rank of brigadier general and, at the same time, the first Black woman to serve as Chief of the Army Nurse Corps. The latter role put her in charge of 7,000 Army nurses as well as policy and operations for eight Army medical centers; 56 community hospitals; and 143 freestanding clinics in the United States, Japan, Korea, Germany, Italy, and Panama.

Gen. Johnson-Brown joined the Army in 1955, shortly after the army was fully desegregated. Before breaking barriers in the Army, she overcame racial discrimination and barriers in her childhood and early career.

In fact, discrimination almost kept her from becoming a nurse at all. Gen. Johnson-Brown told National Public Radio in 2004 that the director of her local hospital’s nursing program rejected her application, saying, “We’ve never had a Black person in our program, and we never will.” Fortunately, her family’s nurse found a path for her at the Harlem Hospital School of Nursing.

After serving her country, Gen. Johnson-Brown continued her social-impact career by leading the government relations department for the American Nurses Association and founding the Center for Health Policy at George Mason University.

Encouraged by one of her professors and inspired by the coaches, teachers, and family members who had made a difference in her childhood, Lorraine Orr took a part-time job as a counselor for six- and seven-year-olds at a local Boys & Girls Club (BGC) summer camp her senior year in college.

Three days into the job, she called her mom and said, “I found what I wanted to do.”

Orr has been working for BGC in some capacity ever since. Now, more than 30 years later, Orr is the first Chief Operations Officer for Boys & Girls Clubs of America (BGCA), the national organization that works with more than 4,300 local BGC branches in the United States and on military installations overseas.

Orr says she recognizes that other women and people of color look up to her for being a barrier-breaker, and she sees it as her responsibility to coach and mentor young leaders, just as people did for her.

Another responsibility she takes seriously is to always abide by the personal values system she established early in her career: the values of service, personal honor (her definition of integrity), honesty, always doing the right thing, and, above all, making every decision based on what’s best for the children she serves.

“I believe if you change the trajectory of a young person… it starts to impact the family; then that family impacts community, that community impacts whole cities, and that really is the foundation of what we call today collective impact,” Orr says.

On September 24, 2016, the National Museum of African American History and Culture opened on the National Mall—the 19th and newest Smithsonian museum. Lonnie G. Bunch III, the museum’s founding director, had been working toward that day for more than a decade, and others before him had begun their efforts as early as 1915.

Writing in Smithsonian Magazine in the museum’s opening month, Bunch said: “Getting this museum organized was like taking a cruise at the same time you’re building the ship.” He had to raise $540 million from public and private sources; choose a site on the National Mall; manage the design and construction of the building; and hire staff, who in turn had to build the museum’s collection (which is now at more than 36,000 artifacts) and design the exhibits.

In many ways, the National Museum of African American History and Culture embodies the goal of Black History Month year-round: to help all Americans understand Black history and the role that Black Americans have played in American history.

“I think the museum needs to be a place that finds the right tension between moments of pain and stories of resiliency and uplift,” Bunch wrote in Smithsonian Magazine. “There will be moments where visitors could cry as they ponder the pains of the past, but they will also find much of the joy and hope that have been a cornerstone of the African-American experience. Ultimately, I trust that our visitors will draw sustenance, inspiration and a commitment from the lessons of history to make America better.”

Idealist Careers | Helping you land, love, and grow in your social-impact career. And visit Idealist.org explore thousands of great jobs and social-impact organizations near you.
facebooktwitterlinkedininstagram
Share on TwitterShare on LinkedinShare on Facebook