Our regular in-person hours are 9:00 to 5:00, Monday through Friday.  We also offer virtual appointments, webinars, & events.  We are not offering drop-ins through Jan 28.

Career Conversation – One Journey in the Policy, Government, and Non-Profit Fields 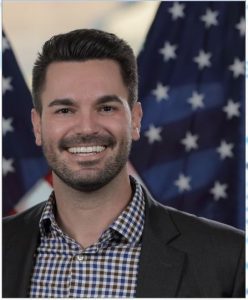 Who is our interviewee?

Rich Williams is an Officer for Pew’s Project on Student Borrower Success where he specializes in evidence-based research and policy development aimed at reducing the number of student loan borrowers that are delinquent or in default on their student loans.

Before joining Pew, Rich worked on issues related to college affordability, financing, and student loan repayment for the Office for Students and Young Consumers at the Consumer Financial Protection Bureau and as the Senior Higher Education Policy Advisor for the House Committee on Education and the Workforce. Rich is a first-generation college student who attended Coconino Community College and earned a BA in history from Northern Arizona University in Flagstaff, AZ.

How did you get started in your career working in the non-profit/government sector?

I entered college without a clear career trajectory. I always figured I would end up working in the public sector like both of my parents, perhaps as a teacher. I ended up being interested in college affordability as a product of my own experience and a little bit of chance.

Going to college was not a guarantee for me. My family and I worked hard to save enough money to make sure I could be a first-generation college student. What we didn’t expect was watching that money be drained by rapidly increasing college costs and inflated textbook prices. I was angry, but didn’t know what to do until an organizer for a local non-profit told me about a campaign to get the college to lower textbook prices. I channeled my energy into what would be a successful initiative to change how the campus and bookstore purchased, marketed, and sold textbooks, ultimately saving all students on our relatively small campus over a hundred thousand dollars a year.

After seeing how a small group of people can advocate and succeed in bringing about large scale change, I was hooked on the idea of developing, organizing, and advocating for solutions to the ever growing number of problems students and families face paying for college and repaying student loans.

Why did you choose to work at the places you have? What about the work or the organization was interesting or motivated you?

My first job out of college was with the same organization that first showed me how to organize as a student.  I never thought I would go into organizing or politics, but it was 2007 and many of my peers and I were compelled by what then candidate Barack Obama was doing to organize communities. I took the job to better learn how to organize at a grassroots level to harness the power of average people to bring about large scale change.

For the last five years I have worked in government as a new way to advance the issues I personally care about. I was compelled to work with the House Committee on Education and the Workforce because it was the genesis of many college affordably solutions. It was also important to keep working for an issue, rather than directly for a Member of Congress, who can have their own agenda. I used that same idea when I moved over to the Consumer Financial Protection Bureau’s new Students and Young Consumers unit.

As DC has changed, I’m now back outside the government returning to the front lines, advocating for the issues I care about.

You’ve held jobs both inside and outside of government, what have you learned about creating change and making an impact?

What I loved most about organizing around issues and policies is that you can always focus your attention where it matters most. For example in DC, the policymaker you need to convince could be in a chamber of Congress, the administration, or an agency. On the outside you can go wherever you are needed to keep the ball rolling. If you are inside a government agency, you are a little more limited. When I worked in the House of Representatives many of the policies we cared about were under consideration by the Senate, so I was unable to always directly influence that debate.

The government can certainly have its advantages though. I found that moving a policy within a federal agency can be slow and at times tedious, but when an agency does something it tends to stick. In doing so, your work can provide long-term services or resources to hundreds of thousands or millions of Americans who need them the most.

Whether inside or outside the government, I have found that success at every level was due to networking with colleagues, building collations of people who shared a similar cause, and collectively advocating around shared ideas and goals.

What can college students be doing now if they are interested in pursuing a career pathway similar to yours?

Always be networking and learning from other people, particularly those with the skills you desire or relationships you want to advance. Consider volunteering or working with a non-profit or policy maker that interests you to see what motivates you the most. An internship can be a great way to first get involved in an issue or organization and begin developing your list of mentors, particularly with non-profits that don’t have the ability to hire more staff.  Don’t underestimate the skills and experience you gain as a student too. Being involved with campus leadership positions, clubs, and academic committees can all provide concrete skills to help advance your career.

Any other words of advice for UW students interested in non-profit/government careers?

Particularly when starting out, you may not be the smartest or most experienced person in the room. And that’s okay! However, getting to know the smartest and more experienced people will allow you to excel past many of your colleagues. Build your network, particularly a set of peers you respect and trust that can help you accomplish personal and professional goals. It’s also always a smart idea to treat everyone you meet like they could be your next boss. In my case many were. A lot of policy areas and communities are quite small.

Also, find what really motivates you. Non-profit work is really rewarding, but it’s not all sunshine and rainbows. When you need to pull a long week, chase grant funding, or deal with endless bureaucracy it really helps to be working for something you truly care about. Whether that is advancing new policy, providing direct services to the community, or something else, make sure you’re having fun.